Infographics Are So Hot Right Now

So why are infographics so popular these days? Before answering that question, I want to define what I mean by “infographic.” Wikipedia’s definition says information graphics are visual representations of information, data or knowledge intended to present complex information quickly and clearly. And if that doesn’t do it for you, here’s an infographic on the definition of infographics.

While I agree with Wiki’s definition, I’d like to further define by adding: visual appeal is very important for an infographic, and successful ones incorporate the subject matter of the information/data/knowledge into the visual presentation. I made an interesting observation a month or so ago about the three guys in the R+M office who ride motorcycles, and thought it would make a great example to illustrate my point. 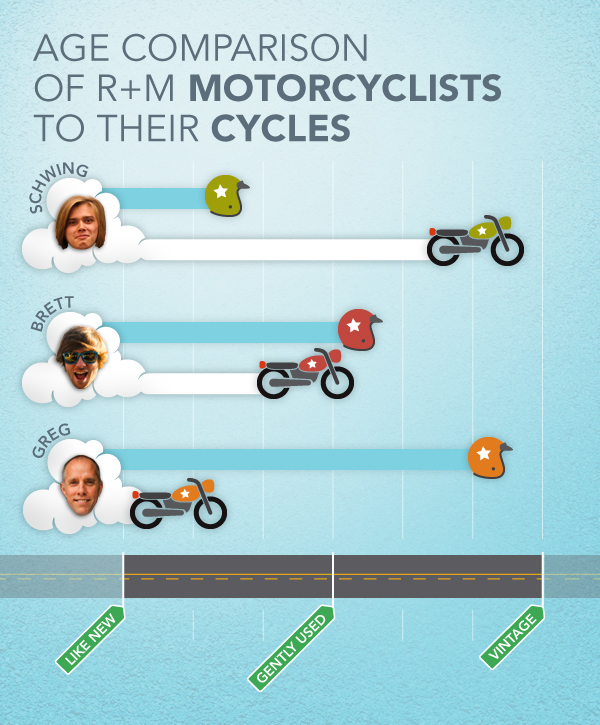 In addition to simply visualizing the data, I’ve incorporated the motorcycle theme into several elements of the graphic. This adds visual interest and sets the tone for the type of information displayed.

Now back to our original question – why are they so popular these days? Well, they’ve actually been around for a while. Here’s the classic historic example from 1861 that show’s Napoleon’s invasion of Russia. As for the infographic’s surge in popularity today, the Internet has had a major effect on this phenomenon. It brings us more information, more access, more quickly. And we, as consumers, have grown accustomed to digesting this increased amount of information in concise chunks. Plus, what’s not to love about displaying information in easily digestible and aesthetically appealing ways? This infographic tells us that 90% of the information that comes to the brain is visual. That alone is a pretty compelling metric.

There are a several Internet entities now that are totally dedicated to graphical information display and some are starting to capitalize on the infographic trend. Visual.ly recently introduced a new service called “Marketplace,”  where they connect you with an infographic designer specific to your infographic needs. Need to visualize the rise and fall of the Wu-Tang Clan through their discography? Too late, it’s already been done. But Visual.ly can hook you up with the designer who developed it!

And then there’s infogr.am, which cuts out the designer completely. This site allows any Joe Schmo to create his own infographics using a templated approach. “Create more than 30 chart types. Anything from bubble charts and tree maps to simple pie charts.”

Taking this approach puts your infographic at risk for being considered part of the “charts and graphs” family – where is the value in that? Do we want our infographics to become that generic?  Shouldn’t they be tailored to the unique information we are trying to convey to our audience? This brings me back to my extended definition of an infographic: incorporate the subject matter into the visuals.

Infographics are here to stay. With the rise of the social data revolution and big data, expect to see more and more infographics permeating the internet.