The fact that there’s a fountain of research studies, surveys and books, on the topic of “making meetings better” says to me that these necessary evils leave much to be desired.  Their structure, impact on morale and staff productivity seems to be discussed frequently. From my point-of-view I wanted to know: 1) why do meetings cause such dread and 2) is making them shorter the answer? 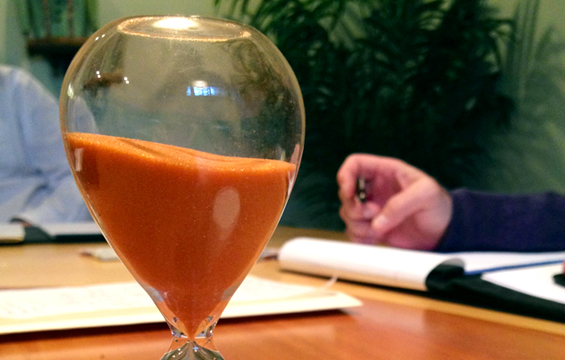 In my research I found tons of best practices on how to conduct shorter meetings,  how to keep meetings productive as well as statistics on how much of our day we’re stuck in meetings. The study I found most informative covered how employees feel about meetings and why they feel that way.

My simple-syrup reduction from this 26-page study is: meetings are considered an interruption. Nobody likes interruptions. Even when meetings are planned, they cause a perceived down-shift in productivity and upswing in mental expense, for possibly little reward. We dread meetings, we dread planning for them, participating in them and when they’re long, we’re too wiped to feel relief when it’s all over to actually be productive again.

Experiments of Professors Luong and Rogelberg1 revealed, the more meetings one has to attend, and the more time one spends in meetings, the greater the negative effect. They go on to reveal meetings that start late, lack structure and run long are the most dreaded. Furthermore, the indication of the meeting starting late or starting without all of the invited parties had a direct effect on the perceived outcome of the meeting (i.e., starting late = poor organization = running late = major dread).

In my experience, I have NEVER attended a meeting that ended early where someone left upset about it. On the contrary, I see smiles as they walk away with pep in their step like they just got a free milkshake or an unexpected discount. So I wonder, do shorter meetings in general relieve this dread or is setting expectations for long ones and delivering short ones the key? Maybe a little bit of both, but I found more research to support the former.

This graphic shows when people are paying attention in their meetings versus when they lose focus doing other things, like checking email. Their review of thousands of meetings revealed the optimal length of a meeting based on how long people tend to pay attention and at which point they tend to drift off. 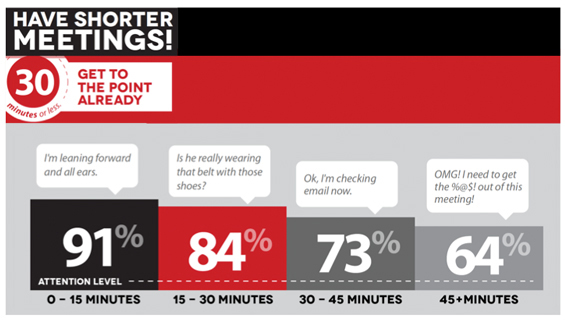 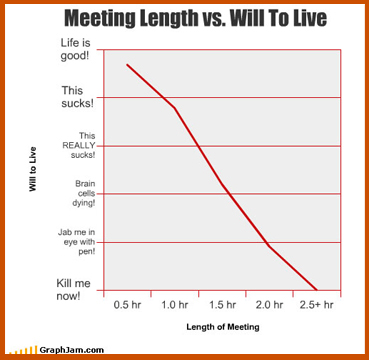 Ray Williams, executive coaching professional, sites numerous studies, surveys and resources on “why meetings kill productivity.” One survey from Industry Week, of 2000 managers, said at least 30% of their meetings were a waste of time.

I think the, “Meeting Length vs. Will To Live,” sums it all up, shorter meetings = less dread.

Here are a few resources for more productive, shorter meetings.

If you have some resources you’d like us to include in this shoot me a comment and we’ll keep the tips coming.

FROM THE WORK WELL
The Work Well is a source of knowledge to help make your
work culture a little happier + healthier.

1) A study by Luong and Rogelberg (2005), Employees’ feelings about more meetings: An overt analysis and recommendations for improving meetings.